21st February, locally known as ‘Ekushey February’ in Bangladesh is ‘International Mother Language Day. It is also Language Martyrs Day in Bangladesh. This day is also natively called ‘Bhasha Dibosh’, ‘Shahid Dibosh’, and ‘Antorjatik Matri Bhasha Dibosh’. Behind all this name there is a monumental significance.

To signify this day, we have to look back to the 21st of February of 1952, on the 8th of the month ‘Falgun’ in 1359 from the Bengali calendar. An incident took place that never happened in the history of mankind.

Consequently, UNESCO declared this day as ‘International Mother Language Day. The world has been observing this day since 21st February 2000. This announcement glorifies the movement by Bengalis on 21st February 1952.

The Government of Pakistan was working from West Pakistan. In 1948 the government announced that Urdu would be the only national language of Pakistan while most of  Pakistan’s people were native Bengali speakers.

The people of East Pakistan disagreed with that decision of the government. They insist Bangla be one of the national languages besides Urdu. This demand was also placed in the Assembly of Pakistan. But the government did not agree with this.

The University of Dhaka students with civilians arranged rallies and meetings on 21st February 1952 under section 144. They got out of their house and publicly attended the rallies as a movement against the government. Police fired on the rally.

People died in this firing. Salam, Jabbar, Barkat, Shafiur, and Rafiq died and many people got injured. This movement obliged the government to make Bangla one of the national languages of the country. Since then people of then East Pakistan and now Bangladesh mourn on this day. Pay homage to their martyrs and observe it as their ‘Shahid Dibosh’(Martyrs Day). 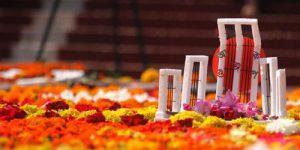 The incident of 21 st February 1952 was a rare event in history. No nation around the world ever died for their mother language before. Regarding these two Bangali immigrants of Canada Rafiqul Islam with Abdus Salam propose through a letter to the UN president to proclaim this day as International Mother Language Day.

This proposal was brought to the Bangladesh parliament. Then an official proposal was proposed to UNESCO from the government of Bangladesh. After all this 21st February was declared ‘International Mother Language Day by UNESCO on 17 November 1999

For Bangladesh, this day is both about celebration and mourning. It is a national holiday. As international Mother language day, they celebrate this day with the sorrow of their martyrs.

The government starts this day by placing a flower wreath at midnight in front of the martyr’s monument called ‘Shahid Minar’. Then in the morning general people pay homage by doing the same.

People go to the monument with bare feet, walking and singing the song ‘Amar Bhaier Rokte Rangano Ekushe February”. This is called ‘Prabhat Feri’ and pays homage to the martyrs.

UNESCO declared international mother language day to encourage the global diversity, multilingualism, and perseverance of native languages. With this thought, the whole world celebrates this day.

Canada, Russia, China, Philippines, India, Egypt, and the USA celebrate this day with tremendous arrangements. The world celebrates it in a colorful way to show their respect for their mother tongue. To keep it alive and cherish it with honor.

There are one international award and three native awards regarding this day, those are:

Audrey Azoulay the director-general of UNESCO said “By bringing their speakers closer together, by allowing them to flourish in a shared context, mother tongues generate social inclusion, innovation, and imagination. They also breathe life into cultural diversity and serve as instruments of peace.”

President of Bangladesh Abdul Hamid stated that “The spirit of Amar Ekushey in now the incessant source of inspiration for the protection of own languages and culture of people around the world, Imbued with the spirit of Amar Ekushey, let the bond of friendship among multilingual people be strengthened, world’s almost defunct languages are revived and the globe be diversified in respective societies- it is my expectation on Shaheed Day and International Mother Language Day.”

On this occasion, the prime minister of Bangladesh Sheikh Hasina also stated that “Holding the spirit of Ekushey and War of Liberation, our government achieved huge progress in every sector including macro economy, agriculture, education, health, communication, information technology, infrastructure, power, rural economic development, diplomatic success, and cooperation during the last 11 years. Bangladesh is now a ‘Role Model’ for development in the world.”

who committed their lives for our safe country.

to carry our feelings.

Let’s say we love our country much.

it’s our joy and pride fullness that we gained

the right to talk in our own language.

who struggled for our language.

so it is a major feeling that we can use our mother tongue- Bangla! 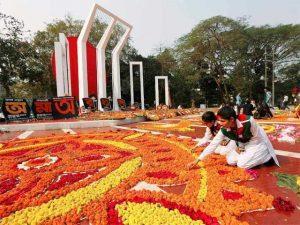 This act of humans is making language diversity threatening. Worldwide 40% of natives do not have entry to an education in a language that they know or talk to. That is bad news for the global educational system.

International Mother Language day is making this way easier to access through their own languages in education. UNESCO is working on multilingual education. People are nowadays focusing on having an education in their own mother tongue.

That is what mother language day brings to us. To achieve schooling in our own understanding languages than in some foreign languages. This makes our own mother tongue a heritage that is neither forgotten nor disappearing.