Ashura is the 10th day of Muharram, the first sacred month of the Islamic calendar. It is the day of fasting, showing gratitude to Allah for saving Moses (Musa in Islam) from the rage of the Pharaons.

It is also a commemorating day for the death of Imam Husayn ®, the grandson of the Prophet Hazrat Muhammad (Sm.). Imam Husayn ® was martyred in the battle of Karbala (present in Iraq) in 680 A.D.

The Muslim community celebrates Ashura all around the world. But, in Islam, there are two groups- Shia and Sunni. So, Ashura comes to them with different meanings.

First, the day of Ashura comes to Shia- a day commemorating the death of the Prophet Hazrat Muhammad (Sm.).’s grandson Imam Husayn ®. But, again, this day comes to Sunni- a day of fasting showing gratitude to Allah for making a path in the red sea to save Moses’ and his companion’s life from Pharaohs.

Meaning of Ashura and Muharram

Ashura is the Arabic word meaning the tenth day of Muharram, while Muharram is one of the four holy months of Islam.

The word Muharram derives from the Arabic word h-r-m, which means haram. As a result, warfare is haram or forbidden in Muharram in Islam. 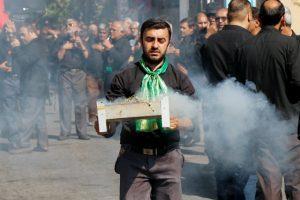 Ashura was first celebrated in 622 AD. The Prophet Hazrat Muhammad (Sm.) was the first person to introduce Asura to the Muslim people.

In Shia belief, Ashura is the day of mourning for the martyrdom of Imam Husayn in 680 AD.

In the Arabic calendar, the day starts from the sunset to the sun down on another day. Ashura begins at the twilight of the 9th Maharam, which ends up at the sun-down of the 10th Muharram.

History of Ashura and Occurrence of Shia and Sunni

The history of Ashura and the occurrence of Shia and Sunni have a connection.

The Prophet Hazrat Muhammad (Sm.) died on June 8, 632 AD. His death created a political turmoil that arose in the Muslim community. After his death, the place of the leadership was vacant. Taking his place created a political conflict between Muslims.

This chaos created a division in the Muslim community that led to two groups. One group supported Abu Bakr. He was the close companion, a distinguished advisor, and a father-in-law of the Prophet Hazrat Muhammad (Sm.). Therefore, he was considered the rightful successor and should be the Caliph.

On the other hand, some people supported the Prophet’s son-in-law and a cousin named Ali ibn Abi Talib. The people who were supporting Abu Bakr were known as Sunni, and the other group supporting Ali was regarded as Shia. The Sunni Muslims considered Abu Bakr as their Caliph, while the Shia community made Ali their first Imam.

The conflict between Shia and Sunni went on for many years. Finally, Ali’s second son Imam Husayn ® was the third Imam for Shia, and Mu’awiya ibn Abi Sufyan’s son Yazid became Caliph. Yazid ordered Imam Husayn ® to recognize him as a caliph. But the refusal of Imam Husayn ® led to the battle of Karbala in 680 AD.

The battle of Karbala lasted for ten days. On the 10th day of fighting, Yazid’s army killed Imam Husayn ® and his companions. They were denied access to drinking water or any food.

The Shia community celebrates Ashura as the day of mourning for the death of Imam Husayn ®. According to Shia Muslims, he was the third Imam in the history of Islam. He had a close relationship with the great Prophet Hazrat Muhammad (Sm). Unfortunately, in the battle of Karbala, he was brutally killed by Yazid’s army. 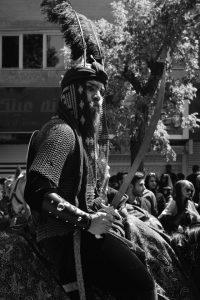 On the tenth day of Muharram, Shia people wear black dresses symbolizing sadness. They make a possession, beat their chests, and lament for Imam Husayn ®. Some use chains, blades, and other things to hit upon them. It is called “Tatbir.” They wet their bodies with their blood. It does feel like the struggle and sacrifice of Imam Husayn ®.

A white horse is loosened, symbolizing the horse of Imam Husayn ® returning to the camp without its owner.

Sermons are given and call upon the virtues and sacrifices of Imam Husayn ® and his devotion to Allah.

According to the Sunni tradition, it is the day when the Prophet Hazrat Muhammad (Sm.) did fast in Mecca. So they do fast, give sermons, and do other religious activities.

Ashura and Judaism have a close relationship. In Muslim tradition, Ashura is the day of fasting or remembering the death of Imam Husayn ®.

In the Jewish religion, it is the day of rescuing the people of Israel led by the Prophet Musa from the rage of the Pharaohs. So, they fast on the tenth day, which is regarded as Yom Kippur.

Ashura is a momentous day among the Muslim community. It is not only a day of fasting or a day of remembering but also, this day has some special meanings.

This day, giving charity is one of the ways to get closer to Allah. In Islam, it says, one gives charity on this day; it will be compared with the charity of the whole year.

On this day, Israelites led by Musa were saved from the hands of the pharaohs. Allah helped them by creating a path in the red sea.

In Islam, there is a saying about the 10th day of Muharram which is the Ark of Nuh landed on the mount of Judi.

There is a similarity in the day fasting in Muslim and Jewish communities. Jews are fasting on the tenth day. So, Islam recommends starting fasting for two days, from the ninth day of Muharram to the tenth day, to make a difference between the two religions. One can also start fasting from the tenth day to the eleventh day.

Asura is not only a mere day of repenting or fasting but also bears some suitable moral and religious lessons to follow. It teaches us-

Each year, this day consists of many religious events. They make a procession to commemorate the death of Imam Husayn ® and punish themselves with blades and chains.

Lahore is well known for starting one of the biggest processions in South Asia since 19 century. From Nisar Haveli, Mochi Gate, the procession begins and ends at Karbala Gamay Shah.

In Islamabad, the procession starts and ends at Imam Bargah, Sector G-6.

The procession starts from Nishtar Park in Karachi, and at Hussaini Iranian Kharadar, the parade ends.

In Rawalpindi, Imam Bargah Colonel Maqbool is the opening place for the procession. The procession starts at 10 am and ends at 9 pm at Qadeemi Imam Bargah.

In Multan, the procession starts at the shrine of Shah Shams from Astana Lal Shah.

The Central procession starts at 11 am in Peshawar and ends at Manazil at night.

Ashura is also observed in Bangladesh. The Shia-based community gathered on the premises of Imambara

Hussaini Dalan, and they started the Tajia procession from it.

Again, different Islamic organizations arrange programs relating to it. In Baitul Mukarram National Mosque, the Islamic Foundation sets Waj and Milad Mahfil to highlight the importance and significance of Ashura.

Afghanistan is another country to celebrate Ashura. Karte Sakhi shrine in west Kabul is one of the main places to mark Ashura. Every street, road, and other is decorated with Ashura flags, banners, and gateways. People come and join the procession. They wear black robes and green headbands and chant the name of Imam Husayn.

But nowadays, Ashura in Afghanistan is seen celebrating narrowly. The Taliban is the main reason for this.

What To Do In Ashura And What Not

In Islam, some rules must follow to celebrate Ashura –

Ten facts about Ashura you should know-

Is Ashura A Public Holiday?

Ashura is a holy day in Islam for enshrining, lamenting, or fasting. In the sacred month of Muharram, Ashura dignifies the death of Imam Husayn (R) for his noble cause. Moreover, it teaches the lessons and morals of Islam that Imam Husayn (R) tries to spread to every Muslim. Therefore, it is necessary to follow the rules and regulations of Islam and be devoted to Allah.

More Muslim Religion Festivals You May Want to Know About:

Eid ul-Adha is the festival of remarkable sacrifice