Bangladesh got its victory over Pakistan on 16th December 1971, since then the nation has been celebrating this day as their Victory Day, locally known as ‘Bijoy Dibosh’. The nation fought against Pakistan for independence for 9 months. This war is called the ‘Bangladesh Liberation War’.

Bangladesh celebrates this day to honor its martyrs and rejoice in their freedom. Almost 3 million people were assassinated in this war by the Pakistani Military. At last, Pakistan surrendered to Bangladesh on the 16th of December 1971. As a result, one of the most brutal wars of the twentieth century stopped.

History of Victory Day Of Bangladesh over Pakistan

‘Mukti Bahini’ participated in this war without any modernized weapons. Almost at the end of the war, Indian militants also joined Bangladesh Mukti Baheni to fight against the Pakistani Army. After all this Pakistan Army agreed to surrender on the 16th of December 1971.

Pakistani Army surrendered at Ramna Race Course, Dhaka on this day. Lieutenant Amir Abdullah Khan signed the ‘Pakistani Instrument of Surrender’ from the Pakistan Army. Also, there were present Indian military officers to witness this.

On behalf of Bangladesh, there was present Commodore A. K. Khandker. After accepting the surrender the general people started cheering and giving anti-Pakistan slogans on Ramna Race Course that day. Bangladesh gained independence and freedom from Pakistan. 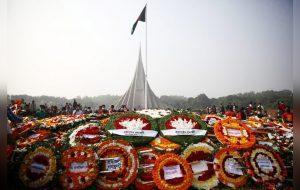 Bangladesh celebrates this day every year by giving tribute to its martyrs from the liberation war. The day starts by placing flowers in front of the national memorial at Savar, Dahaka. The Bangladesh Army held a military parade at the national stadium.

This parade is one of the largest yearly army parades in South Asia. The president of Bangladesh exchanges the guard of honor. Military from all sectors such as the air force, army, navy, etc participates in the parade.

On this public holiday, the national flag hoists in government buildings. Streets and offices are decorated in national flags. Mass media prints special features for this day. Radio-television on-airs distinguish shows in honor of this day.

That is because Bangladesh wasn’t served with freedom. From their highest leader to normal people everyone had to fight for their freedom. After 9 months of a violent war, they gained freedom.

The leader ‘Bangabandhu Sheikh Mujibur Rahman’ declared their independence on 26th March 1971, as the Pakistani government was being unfair to Bangladesh. Then Pakistan and Bangladesh were formally at war. Bangladesh defeated Pakistan after 9 months and on the 16th of December 1971, Pakistan surrendered officially.

This surrender wasn’t easy, it was an exchange of 3 million people’s sacrifices, and blood. To memorize all those people’s souls, to memorize the leaders’ sacrifices, Bangladesh celebrates its national days individually. They earned it, they fought for it.

Messages from Country Chiefs on Occurrence of The Victory Day

Every year the prime minister and the president of Bangladesh publish separate messages at the time of the celebration of Victory Day.

Prime minister Sheikh Hasina in this affair said  “We have established the rule of law in the country and executed the verdict of the trial of the killers of the Father of the Nation and the trial of the war criminals. We have peacefully resolved the land boundary issue with India,

She further added “Disputes with India and Myanmar on maritime boundaries have also been resolved. Bangladesh’s contribution to the various international forums for establishing global peace has been lauded.”

Also, president Abdul Hamid said “Independence is the greatest achievement of the Bangali nation. But behind the victory, there was a long history of deprivation and bloodshed movement and supreme sacrifice of our people,” 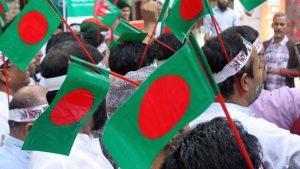 To make your Victory Day more joyful and cheerful here is a collection of Victory Day Facebook status and SMS:

The people of Bangladesh really fight hard for their country’s freedom. It wasn’t easy. And they paid a huge price of 3  million people’s lives for this. This Victory Day is for them. This freedom is the outcome of their sacrifice. They deserve this event of celebration.

Bangladeshi people proved that getting freedom from a powerful opponent is not impossible if you have a great leader and courage for this. May this spirit builds in everyone’s life. May everyone have the taste of freedom.