Boshonto Utshob means Spring Festival. Where most the countries only have four seasons, Bangladesh has six. Boshonto or Spring is the 6th season in Bangladesh. The Boshonto season involves Falgun and Chaitra. Bangladesh celebrates Boshonto Utshob on Pahela(1st) Falgun or 13th February. Nature takes a colourful outfit to welcome the king of the seasons.

The way the spring festival came

Boshonto Utshob is also called the Doljatra or Holi. The Doljatra is considered to be a Hindu Vaishnav festival. The British initially thought of the festival as the Roman festival “Lupercalia.” Many also compared it to the Greek festival of “Bakanalia.”

Bangladesh adopted this celebration from Puri. In the Middle Ages, Emperor Akbar introduced Akbari year or Crop year as the Bengali calendar. He also presented 14 festivals on that calendar. Boshonto Utshob was one of them. People from all Bengal communities participated in various folk festivals and fairs during the spring season. The tradition of celebrating Boshonto Utshob on Pahela Falgun is also conventional. 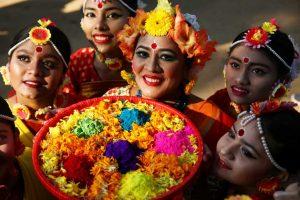 The fighting spirit of Bangladeshis rose in the month of Boshonto. The language movement was held in the Boshonto season in 1952. When the police shot them, they said, “We will b double in number in next Falgun.” As a protest, Bengalis were interested in restoring their cultural heritage. People are celebrating Pahela Falgun by wearing yellow Panjabi and saree since the early sixties. But, people are celebrating this festival for a long ago,

Bangladesh started celebrating the Boshonto Utshob in 1401 Bangla year. Since then, the National Spring Festival Celebration Council has been organizing spring festivals. Now, the festival is celebrated in the capital Dhaka and almost all districts of the country, even in remote areas. This festival has become a universal festival in Bangladesh.

The brave fervour and tide of bonding emotions as if they were united are heavily linked with the 8th Falgun or 21st February of 1952. On that day, immortal language martyrs like Salam, Jabbar, Barkat, Shafique shredded fresh red blood on Dhaka’s streets to guard the honour of the mother tongue Bangla. But the Pakistani rulers did not only attack the Bangla language, but they also started to attack the Bangladeshi culture.

As a protest, Bengalis in East Bengal were keen to restore their cultural heritage by ignoring the Pakistani regime’s torture. So, the trend of girls wearing saree on the Pahela Falgun started in the early sixties. There may not be all kinds of sarees available in the market then, but the respect and eagerness for the culture among the educated Bengali women were genuine.

So they would stay awake the night before Falgun and paint their sarees with flowers on them. Or those who could not do so much, would at least wear yellow or purple sarees, and garlands of flowers around their necks and go out to celebrate the day.

Boshonto Utshob at the University of Dhaka

The University of Dhaka has an outstanding contribution to converting this day into a universal festival. More specifically, a group of students from the Fine Arts Faculty. They celebrated the Boshonto Utshob in 1991 without any pre-preparation. That year, some girls from the Fine Arts Faculty bought Sarees and printed blocks on them in Maitri hall.

The next day, they came to the Faculty wearing Sarees. The Book Fair at Bangla Academy added extra madness to their celebration. They celebrated it before the collapse of the autocratic military ruler, Ershad. Flowers, butterflies, and birds were already made of coloured paper to celebrate the anti-autocracy movement’s victory.

The boys took them and carried out a colourful procession with the girls wearing colourful sarees. As the rally was going on campus, participants were reciting the child-like rhymes. In 1992, the students of Charukla celebrated Boshonto Utshob by organizing a small event, with a face-to-face gesture of friendship. And in 1993, the Holi festival was organized on the campus in Pahela Falgun. Thus the foundation of the Boshonto Utshob festival was established at Dhaka University.

Pahela Falgun as the day of affection and love

For many people, Boshonto is the season of love. The king of the seasons returns every year with the message of love. People have been celebrating Valentine’s day for several decades, but our own culture also significantly impacts people’s minds and hearts. Preferably, many people capture Pahela Falgun as the actual day of love. The emotional minds of people shake simultaneously with new leaves.

A lot of people wait all year to express their affection to a particular person at this festival. Again, lovers wearing Basanti sarees and Panjabi on the streets, parks, entertainment centres, and university campuses are common to watch on Pahela Falgun.

I am sure by this time you are already in love with the Bangladeshi tradition of celebrating the Boshonto Utshob or spring festival. You might be thinking about joining the Boshonto Utshob. As a local, you should not have any problems reaching Dhaka University. You need to come to Dhaka and then straight to the University of Dhaka on Pahela Falgun or on 13th February.

And as for foreigners and tourists, after reaching Bangladesh, come out of the airport. There are local transports to go to the University of Dhaka. But I will not recommend it to foreigners.  I will suggest you cross the street using the foot overbridge. Then use the Uber app on your phone and call a ride to Dhaka University. The car driver will unswervingly take you to the event spot. You might also keep an eye on Dhaka Univerity’s official website to get event updates.

Many minds, many thoughts. People celebrate Boshonto Utshob in multiple ways.  That is fine to a specific point. But they should also not forget; this is one of the biggest festivals in our culture. They should not mix it with the western culture of Valentine’s Day. You don’t need an additional day to celebrate love when you already have one.  Let’s come forward and represent this day to the world as the new day of love.

Bangladesh has a vibrant culture. People live in this country in harmony. Bangladesh is a unique country. Outsiders admire them a lot for our culture, our history. Let’s try to keep this that way. As much as we need to celebrate our cultural events, we should also respect other countries’ celebrations. With a world full of love and events, humankind will prosper together.

Pahela Baishakh – The Day to Reborn