The people of Bhutan observe their leader Ngawang Namgyal’s death anniversary every year which is called Zhabdrung Kuchoe. This day yearly takes place on Bhutanese Celender’s 10th day of the 3rd month. This year it is happening on the 22nd of April.

‘Kuchoe’ is called the conventional Himalayan method of commemorating the death of a supreme spiritual person. Ngawang Namgyal was a Tibetian Lama who is a major spiritual figure in Bhutan. He was honorific with the title “Zhabdrung”. Zhabdrung means at whose feet one submits.

Ngawang Namgyal is called the unifier of Bhutan. He unified Bhutan in 1616. After defeating all rival religious schools he started ruling Bhutan. Ngawang Namgyal was born in Tibet in a monastery. His father was Mipham Tenpa’i Nyima and his mother was Sonam Pelgyi Butri.

He had a misunderstanding with his party in Tibet. Following this misunderstanding, he left Tibet and came to Bhutan. After arriving in Bhutan he founded Cheri Monastery on the head of Thimphu valley and started ruling Bhutan.

Namgyel was an intelligent ruler. He built Simtokha Dzong in front of Thimphu valley so that he can control traffic between Paro valley and Trongsa valley. He was a human of high energy and very enthusiastic about art and writing. Besides being a lama he used to meditate and had done a three-year silent retreat.

He also worked for Bhutan’s progression. He started the dual system of government in Bhutan. In this system, there were two leaders in the country. One is the spiritual leader who presides over all the religious institutes. Another one is the administrative leader who used to lead secular affairs and policies. Bhutan still maintains this system by dividing secular and religious affairs.

This great ruler died in 1651. His demise was kept confidential for a long time. People of Bhutan were told that he had been in silent retreat and would not make any public appearance. This secret was kept for fifty-four years. 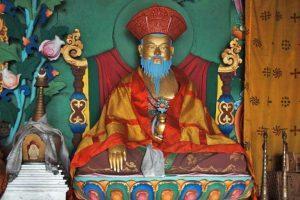 The death anniversary of Ngawang Namgyal is observed traditionally all over Bhutan. The whole country commemorates this day by paying homage to Zhabdrung Ngawang Namgyal. Several religious rituals are performed in the temples in his honor.

This day is spent by offering special prayers and lighting butter lamps by enthusiasts. Devotees also visit sacred sites on this day. Funerary services are also held in many places for this commemoration. Since this day is a national holiday in Bhutan, school, business and working people get a day off on this day.

Zhabdrung Kuchoe plays an important role in every people’s life in Bhutan. Bhutan is a religious country. In every step, they follow their monks. They prefer acknowledging the death anniversary over the birth anniversary. Buddhist teaching believes that birth is a normal occurrence. It is a basic beginning of life. Success is yet to proven.

So, they observe the death of an attained person. Because they believe death brings the fulfillment to any person. If it is the death of a spiritual figure, they observe it with great honor. Zhabdrung Ngawang Namgyal is an honorable figure. He was the unifier of Bhutan, he was the ruler and spiritual lama. In his lifetime he devoted his time to the country and his spirituality.

The people of Bhutan commemorate his death in a traditional Himalayan way. By performing the Kuchoe prayer. He as the accomplisher as the religious ruler deserves it from every Bhutanese.  This offering is most important for the new generation of Bhutanese who should know the root of the country. The man, the spiritual figure behind the Bhutan Kingdom.

As the Bhutanese remark his Kuchoe on 22 April, it is major to remember the sacred person of Zhabdrung Ngawang Namgyal, make offerings to him, pray for his blessings, feel gratitude for his kindness, be motivated by his great works, and most vitally, recall the wise ideals, merits, concepts, and practices he personified. All Bhutanese should intend to live up to his desires in our distinctive way and notice the vision, hard effort, and hopes he had for the country he unified. This will be the literal way of assembling offerings to him.