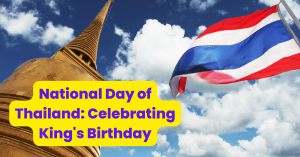 Before reading the article, you should know about the history of the national day of Thailand. I assure you it will give a positive impression, which improves your understanding. So, let’s start our journey by reading history first.

History of the Thailand National Day

Thailand celebrated the national day on June 24 before December 5. On 24, 1932, there was an end to absolute monarchy. To this day, the power of a constitutional government has been increased by degrading the King’s supreme authority.

He came to power on May 5, 1950. In 1960, the government decided to change the national day from June 24 to December 5 to celebrate the day of the King’s birthday. 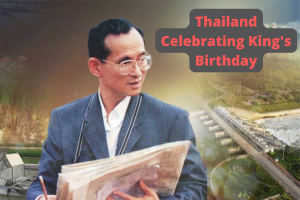 However, before declaring this day as a national day, some things are considered. For example, Other countries – England, Japan, and Sweden are examples of constitutional monarchies where people celebrate the national day on their King or Queen mother’s birthday.

Similarly, the Thai government decided to celebrate their King’s birthday as their national day to match the rest of the countries.

In 2016, King Bhumibol Adulyadej, also known as Rama IX, died because of disease; after the death of King Rama IX, his successor king maha Vajiralongkorn was known as King Rama X has taken power. According to Thai tradition, the date of the national day should go after the present King’s birthday anniversary.

As a result, Vajiralongkorn, or Rama X, sits on the throne, so, naturally, the date of the national day should be his date of birth. But, the King’s government decided to remain unchanged on a national day on December 5.

Why is there no independence day in Thailand?

Celebration of the National Day

The people of Thailand celebrate the national day as their King’s birthday. They celebrate it because they love their King as their King did so much good for them. So, they must pay tribute and homage to their King. The duration of the celebration is from 8 am to 6 pm.

Thai people celebrate on every street, house, and official building. The festival starts at 8 am. In the temple, prayers are offered in the name of the late King Bhumibol Adulyadej. After the prayer, monks are offered alms from the temple. 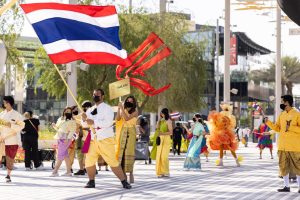 It’s a public holiday in Thailand so, today, people are retired from offices, and schools and other educational institutions are closed. So they are given proper time to celebrate. Thai authority decorates roads with flags, bunting, marigolds, portraits of the late King, and other things.

They wear yellow dresses to make everything colorful. Some stayed close to the palace to see the King. Then, the King comes to the people and gives a speech to them. In addition, the national anthem is played for the whole day.

In the evening, some streets are closed for the rally. People can see the fireworks show in the evening. In addition, cultural programs are arranged everywhere by the local authorities.

Royal speech from His Majesty

On a national day, a speech from His Majesty is a common thing. The King delivers a speech to the people of Thailand from his palace and wishes for their well-being.

Marigold is a flower name that has a massive significance in Thailand. It is a flower of yellow color that reflects the unity among the people of Thailand. On a national day, everyone wears a yellow dress.

Every street is colored yellow. Yellow is also a symbol of Monday. As the King was born on Monday, this day has a special significance to the people of Thailand.

Every year Monday does not come on December 5. Sometimes other days are visible on this date. No matter what, Monday always gets special treatment from the people. 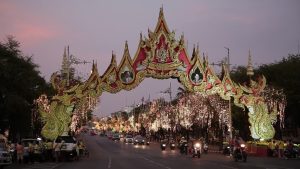 Other significances of the National Day of Thailand

Besides Marigold, the people of Thailand follow some rules not to disobey their beloved King. To them, the King and his family are the symbol of purity that no one can violate. Violating them means defying one himself.

The Royal Authority of Thailand has made some rules to be followed. Badmouthing against the Royal family is strictly restricted.

No one is allowed to say something wrong against the royal family. If anyone dares so, jail is the ultimate goal for them. Moreover, in Thailand’s currency, the King’s face is portrayed. So, it is not allowed to spit on the bath or crush it by foot as it goes against the King.

Does the Royal Embassy of Thailand celebrate national day in foreign missions?

How Tourists Celebrate the National day of Thailand

Thailand is known as a tourist spot in the world. Every year tourists from different countries of the world visit Thailand. December 5 for the tourists has a special significance.

Roads are full of many colorful festoons, balloons, etc. tourists get a chance to observe and mix up with the celebration of the locals. They wear yellow dresses and celebrate and text wishes to others on this day.

It reminds everyone in the country to remember what they are, for whom they are independent, and who they are now is an important matter.

Five facts are mentioned below you didn’t know before –

Let me finish the article by saying that national day is a day of celebration for every country’s citizens. It is the way of getting closer to each other, strengthening the bondings, and mixing with the main flow of the current.

Check out more national events that happening around the world.