Dhaka International Trade Fair is the biggest trade fair in Bangladesh. It was started as an idea to expand the businesses. But, now it has become one of the traditional and cultural festivals of Bangladesh. People wait the whole year for this festival so that they can visit the fair and buy their needed things at the best deal. Before going to the main section, let’s clear some confusion about the trade fair.

Things you need to know about Dhaka International Trade Fair

We all know what is fair. It is a gathering of buyers and sellers in a pre-selected place at a specific time. As for the trade fair, the basics are the same. A trade fair is an exhibition of new products from different companies trying to expand their businesses or gain the trust of customers. You can also call it the trial of products and see if the customers are interested.

This Trade Fair is jointly organized by EPB and the MOC. The fair starts at the starting of the new year and lasts until the end of the month and sometimes till the first week of February. As this fair is organized by two government departments, it is open for all. Visitors need to buy a ticket which is less than a dollar.

Dhaka International Trade fair was organized in 1995 for the first time. It takes place in Sher E Bangla Nagar in Dhaka, near Agricultural University and on the west side of BICC, also known as SAARC International Conference Center.

All About Dhaka International Trade Fair

More than four hundred companies and shops from Bangladesh and beyond participate in this fair as sellers. The fair is very organized as there are country-specific sections in the fair. So, one can easily find all the pavilions of a particular country.

According to The Daily Star, the most popular English newspaper in Bangladesh, there were 483 stalls from 21 different countries in the DITF 2020. Among these stalls, there were 112 pavilions, 128 mini pavilions, and 243 stalls of different categories.

This year the fair was special as it was the 100th birthday of the nation’s father, Bangabandhu Sheikh Mujibur Rahman. There was a special pavilion dedicated to him to remind the young generation about him. There was a presentation of 139 photos from different phases of Bangabandhu’s life. 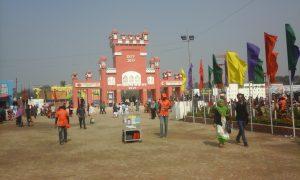 Contribution of DITF in Bangladesh’s Economy

The government earns millions by renting the pavilions and from the ticket price. Besides, DITF is helping new and emerging companies and brands to have the idea of a competitive business system. It helps local and foreign companies to promote themselves and earn customer trust. And it is also helping the general people to know about the diverse cultures of different countries in the world.

Future and Visions of DITF

The venue we are talking about is a temporary venue for the fair. But the Export Promotion Bureau is making a permanent venue for DITF in Purbachal, Dhaka close to Dhaka International Airport. The proposed venue is about 35 acres with a budget of 5 billion BDT.

According to the former commerce minister of Bangladesh, Tofael Ahmed, participants got export orders equivalent to $1.6 Billion in the DITF 2018. And they also grabbed more than 800 million from the 35 day long fair. Bangladesh’s government has a vision of exporting products worth at least $60 Billion by the year 2021.

If the vision comes true, Bangladesh will be a very strong country economically very soon. And a lot of foreign companies will be interested to invest in the country which will open a lot of possibilities.

Bangladesh is an economically underdeveloped country until now. But the government and the people are working very hard to change this. And this is not a dream anymore. According to the Goldman Sachs investment bank, Bangladesh is one of the next eleven countries that have the possibility of becoming one of the major economies in the 21st century.

With that being said, we can understand the importance of fairs like these to expand the businesses and promote new emerging companies to be the next great thing in the country.