Dusshera or Vijayadashami is the last day of Navaratri when Goddess Durga is immersed in the holy water. It is also known as Dasara or Dashain in some states of India. It does not matter what you call it; this day is related to the number ‘10’ and a victory. In Sanskrit, Dush means the absence of the sun, and Hera implies defeat. So, Dusshera means the end of Ravana’s reign. It is one of the grandest and most significant religious carnivals in Hinduism.

There are multiple opinions about the history of Dusshera. Dusshera is the tenth day of Navaratri or Durga Puja. According to the Hindu scriptures, Shri Ramchandra defeated and killed Ravana, the king of Lanka, on this day. Dusshera means the defeat of the ten-headed king. Dusshera is celebrated in different states of India by burning the dummies of Ravana. This day is celebrated on the tenth day of Ashwin Shukla Paksha.

According to another popular opinion, Goddess Durga defeated Mahishasura after the uninterrupted battle of nine nights and ten days. So this is the day of Goddess Durga’s victory. Vijaya Dashami also expresses the weakness of Mahishasura against Mother Durga. Whether it is Mahishasura or Ravana, this day indicates the triumph of goodness destroying evil. This day is also the last day of Navaratri, where people worship nine different incarnates of Goddess Durga.

The followers of Hinduism wait all year to celebrate this religious event. Even though this festival is celebrated in different styles, all states go through a series of events like Navaratri before celebrating Dusshera. On the tenth day, worshippers immerse the incarnate of Goddess Durga in the water. There is no separate celebration called Dusshera. This day is strongly related to the festival of Navaratri. Let us see how different states celebrate Dusshera and linked events.

West Bengal celebrates Dusshera along with other eastern states in the name of Vijay Dashmi. The worship begins on the sixth day of the Navaratri festival and continues till the tenth day. Here, Goddess Durga is considered a daughter who returns to her father’s house after a long time.

Tamil Nadu celebrates this festival in the name of Golu or Bommai Kolu. They decorate beautiful dolls and display them in 3, 7, or 9 levels for worshipping them. This nine-day festival is celebrated by decorating the temples with lights and singing.

In Gujarat, a clay pot is kept as a symbol of the abdomen. Women dress in different colors named “Chaniya Choli” and dance around the Garva pot. Dandia Raas or Garbha Raas is another famous dance tradition that happens during the Dusshera.

Kerala is known as the most literate state in India. They celebrate Navaratri for only three days. People keep their books in front of Goddess Saraswati for two days and prays for enhancing their knowledge.

If North and West India celebrate it with a tremendous and spectacular style, the south keeps everything very calm. They make a colorful flower bouquet with seven layers of seasonal flowers. This bouquet is considered a symbol of Goddess Durga.

Although the people of Maharashtra also celebrate the Dandiya Raas ceremony, they follow some different rituals. During this festival, married women invite neighbors and exchange sweets, chutneys, bindi, Sindur, etc.

Celebrations in other states

The people of Uttar Pradesh and Bihar celebrate Ram Leela on the occasion of Dusshera. On the day of Dusshera, the idols of Deity Durga are immersed in the sacred water. It does not matter how people are celebrating; this festival has a special place in the heart of all Indians. 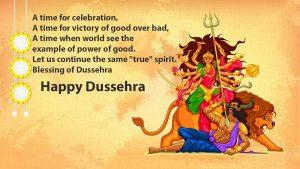 Dusshera might be saddening for some people as Devi Durga leaves on this day. But, conferring to the scriptures, it is a bit different. I will like to mention one story of Sri Ramakrishna Deva In this context. Queen Rasmani’s brother-in-law was so passionate that he did not agree to immerse Goddess Durga even on the tenth day.

Ramakrishna Deva explained that “Vijaya does not mean the separation of the Goddess and the child.” He also said, “A mother could never turn away from her child. Until today we worshipped mother at home, and from today, we will worship her in the heart.” Mathur then calmed down, and they immersed the idol of the mother in the holy water. So, when followers immerse mother Durga in the water, they feel the pain of losing dear ones.

As a result, they start to devote more time to family members. By worshipping nine different incarnates of Mother Durga, they feel the energy needed to succeed in life. By worshipping Goddess Saraswati, they pray for enhancing their knowledge. By burning the dummies of Ravana, they celebrate Durga Mata’s victory. So, this day has high religious importance in Hinduism.

Durga Puja might be a religious festival in Hinduism, but now it has become one of India’s largest cultural festivals. People of all religions and casts participate in the Dandiya or Garva Raas in Gujarat. The same thing goes in Maharashtra or Mumbai. People are celebrating these festivals together and creating bondage. As people are coming close, the possibilities of India’s development are rapidly increasing. Together, they are making India beautiful.

Lakshmi puja is the reminder of wealth and prosperity

Kali puja is a symbol of wisdom and enlightenment