Ekushey Book fair, mostly known as ‘Amar Ekushey Granthamela’ is the annual book fair in Bangladesh. Bangla Academy arranges it in February each year. The fair is dedicated to the language martyrs who sacrificed their lives on 21 February 1952 for the establishment of Bengali as a state language of former Pakistan. This event has an emotional and national attachment to the citizens of Bangladesh.

Today’s Ekushey Book Fair has not started within a day. The first book fair took place in 1972, One year after Bangladesh got independence. The initiative was taken by Chittaranjan Saha, director of Muktodhara Publications. On 8 February 1972, Muktodhara Publications started a short sale with just 32 books that were brought from Kolkata.

What you need to know is, that the Bangladeshi refugees sheltered in India, wrote each of those books. Later on, other publications unofficially joined the book fair. Bit by bit, it became official and also the most popular fair in Bangladesh.

What’s inside the fair?

Generally, the fair continues the whole month of February. Now, the bigger part of the fair takes place in the Suhrawardy Udyan with progressive publications. In contrast, the Bangla Academy part includes some publications with different genres. The Ministry of Cultural Affairs is the governor of the fair; however, the Academy does the groundwork. Generally, the Prime Minister inaugurates the fair. More than 350 publications take part in this annual event. Only the local publishers with 25 books of their own can participate in the fair.

A corner named ‘Nazrul Moncho’ is dedicated to the national poet of Bangladesh. There is also a media center and a dedicated place for writers named ‘Lekhok Kunjo.’ However, it is almost impossible to accommodate the vast crowd of readers and the increasing number of publishers, even in such a prominent place. 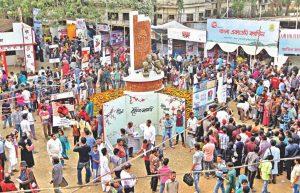 How to bring your book to the Fair?

You need to take several precautions before publishing a book. After writing a book, you need to read it multiple times. If you think your book is ready for printing then you need to do the following:

There are several steps you need to follow to publish a book. You first have to design a cover for your book. You may hire a professional artist or can do it yourself. Then you need to compose your book which you can do while writing the book. Buying paper, printing, binding, and many more. Once you have done all these steps you’re half done. Then you need to advertise your book. To know the full process visit Farihan Mahmud or contact Bangla Academy.

What famous writers said about the fair

Book fair is all about readers and writers. Why not hear their opinions? One of the most famous science-fiction writers of Bangladesh, Mohammad Zafar Iqbal said, “The most beautiful fair among the existing fairs in the world is book fair; And among the book fairs, Ekushey Book Fair is the best.”.Contemporary writer Mouri Mariam shared her views about the book fair. She said, “February is the month of languages, months of books; Amar Ekushey Book Fair is the biggest gathering of writers and readers.” Another famous writer Arif Khandaker said, “Bookfair means the gathering of readers, writers, and publishers. Writers can breathe freely here. This breath is not the breath for surviving but the breath that expands the imagination.”

The Importance of the Ekushey Book Fair

Generally, the present generation is idle and fun lovers. Most of them don’t have the interest or chance to go to the library and read and collect books. Book Fair gives them that chance to walk around the books and pick some out according to their interest. Rare books that are difficult to find throughout the year are easily found at the book fair. Book fairs play an unsung contribution in turning people to books. There are enough collections of suitable books for people of all ages. Children become familiar with new books.

Readers get the chance to meet their favorite writers. They get inspired by meeting the writers. Moreover, we get the opportunity to give a tribute to the language martyrs once more. 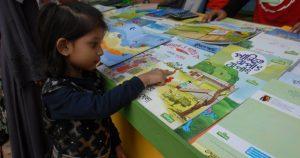 Apart from the National Bookfair of Dhaka, Chittagong and Sylhet also have their own book fair. Bangladesh Book Fair themeing Ekushey Book Fair has been arranged in Kolkata for several years now. Around 70-80 book publishers crossed the border from Bangladesh to Kolkata for joining the fair. The British-Bangladesh community also arranges a book fair in London every year.

Ekushey Book fair is not only our national pride but also an international pride. It is the longest book fair around the world when considering the time. People around the globe have high respect for the Bengali language because of the sacrifices our predecessors made. They often feel attracted to the language, the culture. Each year thousands of foreigners visit the fair. They see Bengali literature very closely and feel the depth.

The Bengali language preserves a unique value worldwide. No other nation had to shred their blood to speak their mother tongue. We give tribute to the language martyrs by organizing the book fair every year. This tradition should go on. We should remember the sacrifices our ancestors made to protect their right to speak their mother tongue. We should be proud of them.