Hemis is the annual festival of Ladakh, Kashmir of India. It is a three-day-long festival dedicated to Guru Padma Samvab, and it was started in 2015. It may not be an old festival, but this has already become a famous traditional festival. Every year, a lot of tourists come here to join the celebration. The next Hemis festival is all set to occur from 30th June to 1st July.

Ladakh is also known as mini Tibet. The three-day-long Hemis festival is closely related to history. In fact, this festival also has a spiritual significance to the followers of Buddhism. Guru Rinpoche Padma Samvab was a Buddhist master in the 8th century. Devotees believe he had driven away evil spirits from Ladakh. Therefore, people see this festival as the triumph of good over evil.

The annual festival of the Hemis Gompa is observed in the fifth month of the cosmic year. However, there is no fixed date for this festival, and according to the Tibet calendar, the festival begins on the day of the full moon in the fifth month and lasts for three days.

Thousands of sightseers from all over the country and abroad participate in the festival. But after every twelve years of the festival, when the Bandar Barsha comes, according to Bhot Panchang, they display the beautiful statue of the four-story-high guru Padma Samvab.

After every twelve years, they display a four-story-high statue of Guru Padma Samvab. This unique Hemis festival is called the Kumbh of Ladakh because more than two lakh people gather to see Guru Padmasambhava idol.

Hemis Monastery, also known as Hemis Gompa, is situated 48 km south-east of Leh, on the famous Indus Riverbank. Hemis Gompa is renowned worldwide for its art and charm as it is one of the most famous and old buildings of Buddhism. It is the oldest building in Leh Ladakh that is famous for its culture and beauty of art.

The sculptures placed in this Gompa have been embellished with gold and expensive stones. This Gompa is equipped with expensive paintings and records. Thus, Hemis Gompa also has a historical value.

A mysterious game, also known as mask dancing, is being played during this celebration at Hemis Gompa. However, the dance is also called Hemis Chechu. The musicians who participate in this dance are all lamas who play 14-15 feet long drums and turas. The game is played on the porch of Hemis Gompa, which thousands of people from abroad come to watch eagerly, and thousands of people participate in it. 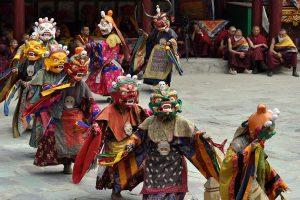 The main attraction of the famous Hemis festival is mask dancing. This event is also known as the dance of purity. There is no accurate information about when the dance started; some people say it began under the reign of King Shushok.

The dancers who participate in the mask dancing wear black hats and take a tree branch called ‘ Shukpa ‘ in their hands, which they also consider sacred trees. As soon as they start dancing, the lamas begin the process of sanctifying the land first by sprinkling ‘ holy ‘ water from the utensils they brought with them.

The name of this event is mask dancing because all the participants wear masks on their faces. However, some people wear the masks of different animals, and some wear other types of masks. The number of these masquerades increases further after the process of sprinkling ‘holy’ water.

Wearing a mask on the porch of Hemis Gompa, the masquerading llama’s dance in line with the clocks’ needles and eventually move to the landscape as couples. This dance is performed very slowly, like the other traditional dances of Ladakh.

In this way, a variety of mask dancing throughout the day lasts for three consecutive days on the porch of Hemis Gompa, but all dances have the same message: ‘The triumph of good over evil.’

Hemis festival is one of the most important traditional and religious celebrations for the followers of Buddhism. This festival has a greater significance as all festivals in Ladakh are held during winter when the temperature is shallow. People cannot participate in it with an open heart. Meanwhile, the ‘ Hemis Festival ‘ is the only festival that is celebrated in summer.

Ladakh is a part of incredible India just beside Jammu and Kashmir, and Kashmir is called the heaven on the earth. So, the festivals celebrated in this region also have a heavenly touch. It is the only Festival in Ladakh to be observed by every sort of people and even the tourists. Thus, this festival is playing an essential role in representing Ladakh in front of the world.