May Day, also worldwide named International Labour Day, is celebrated around the world every year on the first day of May. Along with the world, India also celebrates this day natively known as Antarrashtriya Shramik Diwas by paying tribute to the country’s working-class people.

It is a holiday in almost 29 states of India. People from all classes and religions celebrate this day across the country. This day is for the laborer and mainly for their rights. Also, people call this day Kamgar Din all across India.

To explore the history of international Labour Day we have to go back to the year before 1886. While the laborer was treated as a nonhuman. Industry owners used to make the laborer work 16 hours a day without a rightful payment and the condition of the work environment was threatening.

In 1886 the laborer across the United States arranged a protest against all this behavior of their owners. They demanded 8 hours of work, a non-threatening work environment, and rightful payment for themselves.

The center of this protest was in Chicago at Haymarket. They started the protest on 1st May 1886. The first three days of the protest were peaceful but on the fourth day of the protest police open fire and two laborers from the protest died for this.

The next day there happened a bomb blast at Haymarket. 7 police officers were dead along with 4 non-protesters in this blast. After this police arrested all the leaders behind this protest. The court sentenced death to everyone. 4 people were hanged for this. 1 committed suicide and 2 people were in prison for the rest of their life. 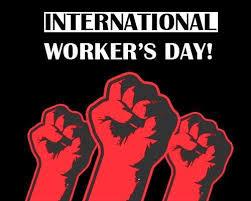 History Behind The Labour Day in India

Labour Day was introduced in 1889 to the whole world. India was still unaware of this day. First-ever India celebrated Labour day was in 1923. This step was taken by the Labour Kisan Party of Hindustan. The celebration was held in Chennai.

The party head Comrade Singaravelar fixed two meetings to commemorate this occasion. One was arranged on Triplicane Beach and another one was on a beach opposite Madras High Court. Comrade Singaravelar demanded this day should be announced as a national holiday and celebrated as National Labour Day.

This was the first day in history that the red flag of labor day was ever hoisted in India.

India celebrates its labor day by paying great homage to its laborers. They celebrate this day individually in the states. They organize rallies and seminars for laborers.

Many parties and trade unions organize parades in honor of this day. Organizers throw contests for children. So, in the future, they can understand the importance of laborers’ rights. The government does the programs department-wise to celebrate this day among the workers.

As laborers, demand, and rights are big issues in India. Famous people and the government have always been there to support the laborers. After all, India has approximately 522 million workers across the country.

The prime minister of India Narendra Modi is always there to support the country’s laborers because they perform a huge role in the country’s progression. He posted on his Twitter account on the occasion of labor day that “Today, on Labour Day we salute the determination & hard work of countless workers who play a big role in India’s progress. Shramev Jayate!,”

The president of India Ram Nath Kovind also wished laborers on this day. He tweeted on his official Twitter handle that “On Labour Day, greetings and good wishes to our hardworking workers, both men, and women. We celebrate the grit and dedication of our countless workers who continue to build our country and lay the foundations for a better, more prosperous India”

We wish to celebrate our laborers’ rights. Labour Day is also a day to celebrate workers and their hard work. So here is some SMS/Facebook status to make your Labour Day happy and joyous.

Labour is the ladder through which human dignity and creative excellence are expressed. Happy Labour Day

A worker is a creator and a great asset to every nation. Happy Workers’ Day

Celebrate workers; celebrate the existence and growth of every nation. Happy Workers’ Day.

Work is no disgrace. Instead, the disgrace is idleness. Happy May Day 2022

May Day is the day to salute the hard work and dedication of strong-willed souls around us. Wishing them a very happy May Day.

To all the good workers of society, we humbly thank you for your constant service to the nation. Happy international workers’ day to you.

Those who enjoy their work can only do it correctly.- Aristotle

The rich can never accumulate wealth without the cooperation of the poor in society.- Mahatma Gandhi

Before the reward, there must be labor. You plant before you harvest. You sow in tears before you reap happiness. Happy Labour Day 2022

From time to time India has always depended on the laborers’ hard work for the country’s economy. They are always worth the best for them. International Labour Day is about the rights of laborers. We should always support and work for laborers’ rights.

We should ensure a safe work environment for them. An equal world for laborers. We should not let capitalism take the place of equalism. We are equal. Together we make India a better place.