Kazi Nazrul Islam was one of the prominent Bengali poets, dramatists, novelists, musicians, and philosophers of the 20th century. He was best known for his leading role in Bengali poetry and his broadminded enthusiasm. He is the national poet of Bangladesh. He was titled a rebel poet because of his revolted views in his writings.

Kazi Nazrul Islam was born on 11 Jaistho, 1306 (25 May 1899), in the village of Churulia situated in Asansol Mahakumar Jamuria, Vardhman, West Bengal. His nickname was Dukhu Mia. He lost his father when he was a kid. After that, he had to climb the steep mountain of obstacles. However, the poet Nazrul appeared in Bengali literature as a storm.

He started to be a caretaker of a Mazar. Sometimes, he used to sing with the ‘Leto’ singing team. He even worked in a bread shop. He was studying, but at a low pace. He had to leave school twice till class six due to poverty. But his result in the annual examination was so good that the school authority gave him double promotion. He also got a & taka scholarship from the Rajbari.

He joined the first world war in 1917 when he was 18 years old. In his words, “I was in the wave of life, I was the first boy in my class, the headmaster had a great hope that I would be able to grow the glory of the school. But the European war started. One day, I saw a team going to join the battle. I also joined them. 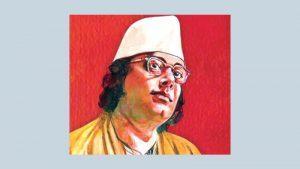 The career of Kazi Nazrul Islam

On his return to Kolkata, Kazi Nazrul Islam started his literary and journalist life simultaneously. His first accommodation in Kolkata was at the Bengali Muslim Literature Association’s workplace at 322 College Street. He worked with Muzaffar Ahmed, one of the officials of the association. When his novels Badhan-Hara, Bodhon, Shat-il-Arab, Badal Prater Sharab were published in top Bengali newspapers,  it created a buzz in Bengali literature.

Nazrul’s literary work has been dominated by love, liberation, and rebellion. He announced to break the wall of religious discrimination. Even though he wrote novels, dramas, and short stories, he is more known as a poet. However, he created a new trend in Bengali Literature-Islamic music, and  Ghazal. Nazrul composed and tuned almost about 3000 songs branded as Nazrul Sangeet.

His birthday is celebrated as Nazrul Jayanti. Bangladesh organizes a large number of events to mark The Birthday of Nazrul. The ‘National Awakening Poet Nazrul’ event is officially held in Trishal, Dhaka, Comilla, and Chittagong in Nazrul’s memory.

Besides, the National Academy of Fine and Performing Arts also organizes an event annually in the memory of Kazi Nazul. People of all sorts will pay tribute to the national poet’s memory at Nazrul samadhi, adjacent to the Central Jame Mosque of Dhaka University. Some renowned educational institutes also arrange cultural programs to celebrate the day by performing Nazrul’s creations.

The people of the poet’s birthplace arrange a fair Named Nazrul Mela on his birthday. Artists from across Bangladesh and Kolkata join the fair. They pay deep tribute to the memorial of the poet. The walls of the village are flooded with paintings, writings, and other alpanas. They also paint his poems and lyrics. 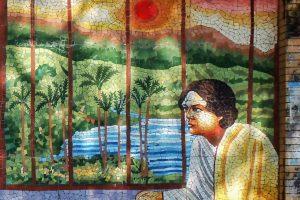 Poet Kazi Nazrul Islam is a self-conscious rare talent. As much as a creative artist needs.  Everything he wrote became an art afterward. Nazrul’s first poem, ‘ Amar Kaifiyat,’ was published in 1919. The poet described himself as the poet of the present. Nazrul created a new trend in his short stories.

Nazrul has been seeking the British eviction in his heart. Nazrul was not against the British until the end – but against the aggression of imperialism. His poetry has a wide range. The practice of liberal humanity in individual life was reflected in Nazrul’s literary life.

The socialist poetry book, published in 1925, opened the door to socialist Bengali poetry. Kazi Nazrul Islam guided the flow of contemporary poetry in the 30s and 40s. He was the top writer in Bengali literature to represent the unity between Hindu and Muslim communities.

Nazrul is probably the most controversial poet in the history of Bengali literature. This was true even during his career as a poet, and truer after his silence. The contrast, the intensity of praise and appreciation, perhaps did not make any Bengali poet so uncertain.

Nazrul’s writings played a vital to the spirit our freedom fighters had. Nazrul always hoped to see people of all sorts and religions living in unity. He died several years ago. But still, we could not make that happen. We should try to live in harmony to pay honor to the rebellious poet Kazi Nazrul Islam.