Every year Pakistan celebrates the birthday of the father of the nation Muhammed Ali Jinnah. This day is officially named Quaid-e-Azam Day also known as Quaid Day and Youm-e-Quaid. ‘Quaid-e-Azam’ means ‘great leader’ in Urdu.

They rejoice on the day of their great leader’s birth on the 25th of December. It is a governmental holiday in the state. People from everywhere in the country observe this day by honoring their leader.

Muhammad Ali Jinnah was the man behind today’s independent Pakistan with his lead, Pakistan gained this sovereignty. Congress and the Muslim League were the parties that are the reason for the discharge of the British Raj and an independent Indian sub-continent.

Nathless if Jinnah never came out with the idea of the Two-Nation Theory Pakistan would never be an independent country. This thought and his leading behind it caused today’s Pakistan. Indeed he is a great leader. Jinnah is the ‘Quaid-e-Azam’ of Pakistan. The ‘Great Leader’  of Pakistan.

Jinnah was ill in 1930 because of tuberculosis. Very few people around him knew about this. He fought the whole fight for independence with his illness and never let people know about this. In 1948 after one year of Pakistan’s liberation Jinnah died in Karachi at 10:20 PM on the 11th of September. The nation lost its great leader on this day.

Mohamed Ali Jinnah was born in Karachi, British India in 1876. His birth name was Jinnahbhai. He was from a rich merchant family. He grew up with three brothers and three sisters in Karachi. He finished his matriculation at Bombay University.

Jinnah flew to London for business in 1893 for business purposes right after his first marriage. In London Jinnah was admitted to Lincoln’s Inn to pursue the degree of the barrister. And the latter give up business. In 1895 Jinnah became the youngest Indian  to be in the British bar

In 1895 he started practicing in Bombay and was the only Muslim barrister there at that time.

Gradually He started attending political events. From 1904 he was a member of the Congress party after some years he also joined Muslim League. In 1916 Jinnah become the head of the Muslim League and in 1920 Jinnah left Congress. He later also left Muslime League for the short term but ultimately returned.

From 1930 Jinnah was officially involved in the act of seeking independence from the British Raj. In 935 Jinnah came up with his theory of Two-Nation Theory. He trusted that Muslims and Hindus should have their own different state for a peaceful living.

His Two-Nation Theory ended up with the result of Pakistan being an independent Muslim country after the dismissal of the  British India Raj on 14th August 1947. 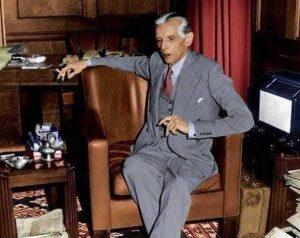 The national flag is raised in every public building. The prominent leaders and army officers and general people place a flower wreath on the ‘Mazar-e-Quaid’ tomb of Muhammad Ali Jinnah. Government performs a guard exchange ceremony in ‘Mazar-e-Quaid’.

The military society of Pakistan honors The Leader with their own ceremonies.  They held guard mounting. The whole security arrangement behind this day is done by the army of Pakistan and the Pakistan air force.

Quaid-e-Azam day is a national day for Pakistan. Various famous people issued messages on this day. The president of Pakistan Dr. Arif Alvi said about Quaid-e-Azam “Today marks a special day in the history of our homeland, On this day, we had witnessed the birth of a great leader, a leader who changed the geography of this continent and gave us our motherland, our very own Pakistan”.

He also added “let’s make ‘Unity, Faith and Discipline’ the bedrock for future growth and progress of the motherland. May Allah be with us and Pakistan Zindabad,”

The prime minister of Pakistan Imran Khan said “We still have a long way to go to fully realize the ideals of our founding father and fulfill the purpose for which our forefathers rendered innumerable sacrifices. We can achieve all these objectives while rededicating ourselves to the guiding principles given by the Father of the Nation”. He also added, “The decisive Freedom Movement spearheaded by the Quaid was a manifestation of his political insight and sagacity, as well as his firm commitment to the ideals of democracy and rule of law till his last breath. Indeed, these developments have, again, vindicated the conviction of Quaid-i-Azam Muhammad Ali Jinnah that the extremist Hindus of India will never allow the Muslim minority to live with respect and dignity.

Below are some status and wishes to make your Quaid-e-Azam day more joyful and to send joy all to your friends and family.

May The Spirit Of Freedom

Be With You And Always

MAY ALL HIS DREAMS

Ahead 2 Pay Tribute 2 Our Great Leader!

4.“Think a hundred times before you make a decision, but once that decision is taken, stand by it as one man.”

And see a joyful tomorrow

We all wish a very happy birthday to our beloved Quaid-e-Azam today.