Bhutan celebrates His Majesty the King Jigme Khesar’s birthday every year on the 21st of February.  It is a three-day national holiday for Bhutanese which they celebrate yearly from 21st to 23rd February.

His Majesty the King Jigme Khesar Namgyel was born on the 21st February of 1980. He was born to the fourth Dragon King of Bhutan Jigme Singye Wangchuk and to his third wife Queen Tshering. He is the eldest son of the fourth Dragon King. He has a younger brother and sister along with eight half-brothers and half-sisters.

He finished his higher secondary study at Yangchenphug High School. Then pursued study abroad at Phillips Academy Andover then at the Cushing Academy he completed his high school. After high school, he took schooling at Wheaton College. Later he studied Foreign Service Program and International Relations at Magdalen College of Oxford University. He has done his graduation there.

Soon after Khesar finished his study he started accompanying his father on many tours. The goal was to meet and talk to the people of the Kingdom. He also represented Bhutan at many international events. He was known as Dasho Khesar(Crown Prince) of Bhutan. On 8th May 2002 at the 27th UN General Assembly, he represented Bhutan. He delivered his first speech to the United Nation then.

On 9th December of 2006, the king shifted his throne to his son Jigme Khesar. Officially the coronation took place on 6 November 2008 attended by a few foreign friends, the Royal family, and important people.

20th May 2011 King Jigme Khesar got married to Jetsun Pema in a Royal Wedding Ceremony at Punakha. His first son Jigme Namgyel Wangchuk born on 5th February 2016. On 31st March 2020, the Royal Family announced the birth of his second son Jigme Ugyen Wangchuk. 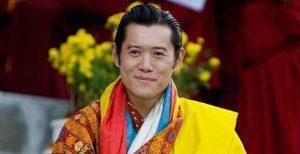 His Majesty the King Jigme Khesar Namgyal Wangchuk is called ‘People’s King’ because of his good relationship with the people of the Kingdom. After taking over the throne he immediately started working on the democratization of Bhutan. He traveled through the country to talk about the draft Constitution of Bhutan to the people and make them aware of democratic exercise.

He continued to travel to the Kingdom to make people aware of higher education, civil service, and business and discuss how the people of Bhutan need to be more hard-working despite being a small country. The king maintained an extremely good diplomatic relationship with India and Thailand.

The king also has taken the landmark project. That project focuses on every Bhutanese family to resolve long-standing issues. It also aimed to improve the lives of remote area people who are in difficult areas of the country.

His Majesty  King Jigme Khesar also took on several projects to make the betterment of Bhutanese people like Kidu, DeSuung Training Program, and Amnesty. These programs for general people make him a more appealing and loving King among every Bhutanese.

Bhutan Celebrates its King’s birthday for three days. From 21st February to 23rd February they give the country a festive look. There are festivals, and parades in the kingdom. The government makes it compulsory for every person in the Kingdom to wear a traditional dress for these three days.

In some places, there take place a flag hoisting ceremony honoring His Majesty the King. This promotes praying for the King’s long life and good health. Along with the prosperity of the Kingdom. Out of belief people eat chili pepper stew called Ema Datse. They also eat cheese and drink local beer to celebrate this day.

Below are some wishes to wish His Majesty on his birthday through Facebook status or SMS.

Under the authority of His Majesty, the country becomes a guide of harmony and prosperity. We the natives wish King a cheerful and prosperous birthday. A very Happy Birthday to the King.

Happy 41st birthday to his Majesty and to the entire country which is right now doused in festivities.

Kings resemble stars – they rise and set, they have, The love of the world, yet no repose. We pursue our King and we will keep on doing as such. Upbeat King’s birthday and happy birthday to him.

Lots of individuals are considering you on your birthday; I simply needed to tell you that I’m one of them! Upbeat Birthday! We the residents are very appreciative of your commitment to countries’ 360-degree growth. Happy cheerful birthday to the King.

This year points to another beginning of a voyage of His Majesty. Under the insightful administration of His Majesty, the country has made marvelous financial and social accomplishments and assumed a huge job in territorial and worldwide affairs. Happy King’s 41st birthday.

Hope your birthday is finished with bliss, love, and exceptional treats for a day of fun that can’t be beaten for the entire country and the regal family. A very happy birthday to His Majesty.

The brilliant age is before us, not behind us. We wish you proceed to succeed and a clear path for the country to develop to an ever-increasing extent. Long live to King and a very joyful birthday.

I wish a peppy king’s birthday to the country, travel, party, eat and appreciate. A day for the pioneer and the resident of this astounding country. Happy 41st birthday to the King.