Music has always played an important part in the history of Bangladesh. For Bangladesh’s people, music is a sensitive entity that demonstrates passion, ecstasy, audacity, rage, vision, affection, and sacrifice. Rock music speaks the language of youth; it also expresses their eagerness, emotion and energy. Joy Bangla Concert is the largest rock concert in the country. This event is connecting the youth and the history of 7th March by creating a bridge.

Context of the Music Event

The founding father of Bangladesh, Bangabandhu Sheikh Mujibur Rahman had given a historical speech on 7th March 1971 to a crowd of two million people. Though we celebrate our independence day on 26th March, this was the day when Bangabandhu publicly declared independence for the first time. He said, “This time the struggle is for our freedom. This time the struggle is for our independence.” This speech inspired all the Bangladeshis to stand for the freedom of the country.

In 2015, ‘Young Bangla,’ a youth-led platform, organized the event for the first time to make the youth remember 7th March’s spirits. It has become a national event since then. Along with CRI-Center for Research and Information, the organization has been organizing this event for six years.

Joy Bangla Concert throughout the Years

The first  Joy Bangla Concert was held in 2015 and formed a standard for upcoming events. Only seven rock bands performed that year. It was the first 7th March oriented rock concert in the country. Since the first concert in 2015, the numbers have been progressively growing, and Joy Bangla Concert has since become a part of the youth pop culture and a familiar name in Bangladesh’s live music industry. (Young Bangla, 2020)

They showed the colourful version of 7th March’s historical speech for the first time at the Joy Bangla concert 2018. And in 2020, they demonstrated a 3D hologram version of the speech where it felt like Bangabandhu was present at the stage, giving people goosebumps for a while. 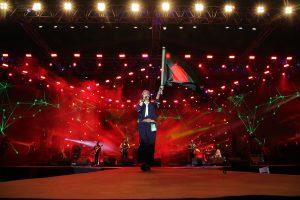 My experience at the Joy Bangla Concert

I got the chance to attend the Joy Bangla Concert for the first time in 2020. It was the 6th version of the glorious event. I registered online and got my e-ticket before the event. I had to print the ticket and collect Joy Bangla merchandise from one of the selected outlets.

On the event day, I, with 2 of my friends, completed all the complications and entered the venue at 2 pm. The event was supposed to start at 1:20 pm, but the venue was still half empty when we entered. Gradually, the crowd was increasing. The event began at 2:30 am with the national anthem.

Five university-based underground bands, An all-female band and 12 major music bands performed at the concert, starting with Introit. Ar Ekta Rock Band, Adverb, Sin, Conclusion and F Minor followed them. F minor got my special attention because it was an all-female ethnic community band in Bangladesh. They performed a lot better than what audiences were expecting. It amazed me that bands were starting their performance with a patriotic song.

Minar started the main segment of the concert at 5 pm. AvoidRafa, Shunno snd Vikings followed him. Then it was the time for the historic speech. It reminded us of how we got our independence. It reminded us of the struggles our predecessors had to make. Three more bands, including Lalon and ArboVirus performed before the very first projection of the 3D hologram version of the historic speech. Nemesis, Fuad & Friends, and the event headliner Chirkutt performed at the concert’s last segment.

Saidus Suman (Bass Baba), The best bassist in South Asia and the vocalist of Aurthohin, made a special appearance. It was one of the days I won’t forget in a lifetime. The day helped me realize that the young generation is the future of the country, and we should prepare ourselves to follow the virtues of Bangabandhu Sheikh Mujibur Rahman.

Importance of such events

Our generation is so engaged in social media and modern cultures that they don’t realize the importance of preserving independence. But a massive percentage of them are rock music fans. It is not possible to gather the young generation to hear a speech. But, Rock music made it look easy. Performing bands try to deliver the values and the messages of Bangabandhu’s historic speech through their songs.

It also refreshes their minds with healthy thoughts. Joy Bangla Concert paved the way to connect the young generation to the ideologies of Sheikh Mujibur Rahman, which will inspire them to be better, to do better in the future.

Young Bangla and CRI  have been arranging the event for several years. This year, the event took place in the early stage of the Corona Pandemic which still is a matter of fear. So, we’re not entirely sure if the event is going to take place next year. But, we’re hopeful about it. If the event happens, you’ve to register online to get your ticket. To know more, keep an eye on Young Bangla’s official website.

Bangabandhu Sheikh Mujibur Rahman dedicated his whole life to the sake of his country. He was able to get ordinary people’s attention and make them participate in the war of freedom. We may have won that war, but we have a lot more to fight. If that speech could inspire 3 million people to sacrifice their lives in 1971, it can also inspire us to take care of our problems and the country. The young generation should follow the virtues of Bangabandhu so that they can be better versions of themselves.