If India is a nation of diverse cultures, then Rajasthan is the state of fairs and festivals. The people of Rajasthan celebrate its traditional festivals with full festivity. Rajasthan is already a beautiful state with its forts, kings, and palaces. One of the most pleasant cities in Rajasthan is Mewar.

The Mewar Festival of Rajasthan is famous throughout India with its beautiful Ghoomar dance. Next year, the Udaipur City of Mewar is ready to organize the Mewar Festival from March 27, 2022, to March 29, 2023.

The antiquity of the Mewar festival started even before the Saudi empire ruled Rajasthan. According to history, Maharana Uday Singh met a divine person meditating on the hill while hunting.

When Rajan bowed down to him, he asked the king to build the fort at that place. The king accepted his recommendation and ordered him to build the fort and establish the city. Later on, the people of Mewar city started the festival. No one could say the exact year when this festival started.

Mewar festival is the Rajasthani way of welcoming the spring season. Inhabitants of Udaipur of Rajasthan celebrate this festival with full dedication. The whole state of Rajasthan gets a colorful appearance on the occasion of the Mewar festival. Udaipur has been the central point for Mewari rulers for a long time; thus, you will get the flavor of roaming around a capital city.

During the Mewar festival, the whole Udaipur city becomes colorful. As shopkeepers stay in a festive mood, they beautify their shops with lights and flowers. Mewar festival has great importance among the women community of Rajasthan. The women wear their best clothes to join the celebrations of the Mewar festival.

Women’s communities gather together to dress Isar (Lord Shiva) and Gangaur(Goddess Parvati). Then they take out a procession with the idols and pass through the whole city. Then they take the parade to the shore of Pichola Lake. They put the statues of Isar and Gangaur on the boat and immerse them in the water.

After the religious part of the Mewar festival is over, people engage in various cultural programs. They perform dances, sing songs, and do a lot of other things to represent the Rajasthani culture. The Mewar festival ends with an outstanding fireworks program at the night.

During the Mewar festival, numerous sessions are organized to combine traditional handicrafts with modern and contemporary styles to rebuild the type of old art in a new form. The event offers craftsmen an opportunity to work together for three days and develop historical arts and crafts using their qualities and skills. The maharana of Mewar Charitable Foundation organizes the program to keep the procedure of heritage conservation regular.

Other organized festivals are vibrant demonstrations of food and drinks through Rangoli. Professional cooks are living there to create cultural, traditional, and colorful cuisines of food. Professional folk singers and folk dancers also perform folk songs and folk dances for three days. Professional artists from all over India are invited to show their qualifications.

Mewar festival is not only a religious festival but also a traditional and cultural festival of Rajasthan. It represents the city of Udaipur in front of the world. This cultural extravaganza attracts a lot of tourists to visit Udaipur and join the Mewar festival. 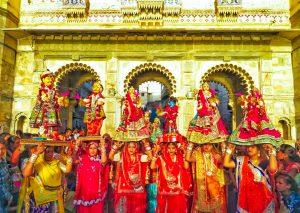 The Mewar Festival is observed every year by the inhabitants of Mewar to welcome the spring, which brings charisma and contentment all over India. It is observed with the Gangaur Carnival of Udaipur, which is of great prominence to the women of Rajasthan. They prepare themselves very well in traditional and cultural clothes to join the carnival. They perform special folk dances during the festival celebrations to create fascination at the festival.

Unique sweets are prepared to offer to the deities and are distributed as offerings among the devotees. As the festival’s religious activities are completed, cultural festivals begin to showcase Rajasthani folk dances and folklore, etc. The festival ends with the burning of crackers and squall, which is appreciated by contributors and general people.

Want to join the Mewar Festival 2022?

If you are staying in any of the big cities, take a flight to Udaipur Airport. It is positioned 22 km away from central Udaipur. Then, leave the airport, take a taxi and go to the festival spot.

Udaipur Railway Station is situated at the center of Udaipur city. You can come here from almost any big railway station in India. You can go there using all kinds of trains; but, if you are a tourist, ride luxurious trains like Maharaja’s express. You can go to the event spot by bus, cabs, and taxis.

Udaipur has a well-established road network with almost all the states and cities of India. A lot of comfortable government and private bus companies are available for this route. After reaching the city, you can use taxis or cabs to go to the event spot.

The small city of Rajasthan has lifted itself by its traditions and culture. People respect unique cultures and often want to be a part of them. Every city has its own culture, and everyone can represent themself in one way or another. If we contribute to developing and expressing our cultures in front of the world, then no culture has to be lost forever. We should take the required steps to save our own culture and help others to keep theirs.