From 1947 to 2022, India has come a long way from being free from British rule. Yearly on the 15th of August India memorializes the day of being liberated. This day is Independence Day of India. This day is also called Swatantra Diwas or is pronounced as Swatantra Divas.

This year India celebrates 75 years of Independence Day. It is a nationwide holiday. People all over the country observe this day by paying tribute to the leaders behind India’s salvation. Among all of them, Mohandas Karamchand Gandhi is the most prominent leader to acknowledge.

History Behind The Independence of India

India retains an immensely rich history of Independence. It contains a partition of the subcontinent. This resulted in the birth of two new nations Pakistan and India. Which are mainly divided by the religions Muslim and Hindu.

India was under British rule for almost 200 years. Which started in 1757 by being defeated in the Battle of Plassey. In 1885 The National Congress Party arose. The independence movement started afterward during the First World War.

Indian demonstrators demanded self-rule after British rule passed the Rowlatt Act. This compelled the whole nation for a gentle movement of non-cooperation. Which was guided by Mohandas Karamchand Gandhi.

Indians participated in the Second World War. This participation gave The National Congress Party a reason to push for the efficiency of self-rule. Meanwhile, the non-cooperation movement was getting intense day by day. Also, the All-India Muslim League was active in their Muslim patriotism throughout these years.

All this political pressure and damage from The Second World War convinced the British rule to the partition of two nations and handed over the power to themselves. On 14-15th August midnight of 1947 British rule declared the partition and newborn two-nation India and Pakistan. 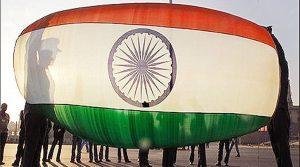 The celebration of Independence Day is divided into three layers. It is celebrated nationally, State-wise, and at last personally by general civilians.

The national anthem is sung on this occasion by paying honors to the leaders of the independence movement. Indian Army and militants take part in a parade on this day.

The state government also celebrates this day similarly. Chief Minister of state hoists the flag and attends the parade by militants. Gives speeches in honor of this day and at the end attends cultural programs.

Civilians celebrate this day in the most colorful way they dress in tri colors from the national flag. Patriotic songs and films are broadcast on the tv and radio. Newspapers publish special news covering independence day. Nowadays kite flying has turned into an independence day tradition. It takes place in Delhi.

Many institutes arrange flag hoisting programs and cultural programs in honor of this day. Important buildings are decorated with tri-color lights. The Indian community around the world celebrates this day. Which is known as India Day in most places.

It is a tradition that the prime minister and The President of India give a speech every year on the 15th of August. Prime minister Narendra Modi and President Ram Nath Kovind delivered a speech on this occasion.

Prime minister Narendra Modi said that every civilian is self-sufficient also added “I am confident that India will realize this dream. I am confident of the abilities, confidence, and potential of my fellow Indians. Once we decide to do something, we do not rest until we achieve that goal,”

President Ram Nath Kovind also gave a speech on this occasion, the president started his speech with greetings for all citizens of India and by addressing the leader of the independence movement Mahatma Gandhi said “We are fortunate that Mahatma Gandhi was the guide of our freedom movement. The combination of a saint and a politician is reflected in his personality. He was a phenomenon that could have happened only in India”

It is a custom to deliver a speech on the day of independence in our country. Whether it is an official program or a cultural program a speech is a must. To make your work much easier, here is a short speech you can try to recreate in front of the listeners.

“Independence Day is a national day moreover a national festival in our country. A day that symbolizes the freedom of our country from British rule.

It is an important day for our country because we got that independence in exchange for battle and hardship. The Leader of the Independence movement paid a huge price for this. Without them, freedom could have never been ours.

Today on this occasion of Independence Day we memorize all the great leaders behind the Independence movement. We should celebrate the day with the full spirit of patriotism.

It is important to celebrate Independence Day. To pay homage to our freedom fighters. The whole nation should know about their sacrifice.

The next generation of our country should be aware of how difficult to get freedom was.

By doing all the celebrations, and rituals, we honor our heroes. We honor their struggles. They deserve this from their country.

It is important to carry the spirit of patriotism in our youth. If we don’t celebrate our memories or our heritage, how would they know how difficult freedom was.

In the end, It can sum up that attaining independence was not effortless. We should remember the hardship and sacrifice of our freedom fighters by celebrating Independence Day.

Yes, we can go with an English speech on independence day but the most enjoyable and preferable language would be our own language in a speech. So, here is some link to check out on youtube for the idea of an independence day speech in Hindi

We all Indians like spending independence day by wishing all our friends and family. Below there are some wishes and Facebook statuses to make your independence day more relaxing and enjoyable

Freedom is the right of every human being. Men are born to be free. So are people and their countries. The Independence of India gave our country that right. It was important to fight for freedom. It was an important protest for freedom. Our great leaders have done it.

Now it is our duty to take responsibility for this freedom, this independence.  As there is a saying that “It is harder to defend than to achieve independence”