The upcoming Ganesh Chaturthi carnival will be observed on Friday, 31th August of 2022 (Gregorian calendar) year.

Ganesh Chaturthi is one of the most important religious festivals of Hinduism. Every year from all over the world Hindu followers celebrates this day with great aspirations. You may have some light ideas about this holy festival. Throughout this article, we will be learning about the significance, importance, and history of the Ganesh Chaturthi carnival. I hope your all light ideas will be clear and bright on this very topic.

Mainly this is a traditional and religious carnival of the Indian subcontinent. Especially in some regions of India, this festival is celebrated for more than thousands of years. Ganesh Chaturthi has been well known as the Vinayaka Chaturthi festival.

What is Ganesh Chaturthi?

You may be wondering what Ganesh Chaturthi is! Ganesh Chaturthi is celebrated to honor the arrival of Lord Ganesh on the Earth. Ganesh is the son of Lord Shiva and Goddess Parvati. According to some Hindu scriptures on this very day, Ganesh has from the mountain Kailash with his mother.

People believe that Lord Ganesh is the symbol of new begging and the removal of all the obstacles. Lord Ganesh also has some other special significance too. Such as he is considered the God of wisdom and intelligence. So, the celebration of Lord Ganesh’s arrival is very essential for all Hindu followers.

Lord Ganesh is generally mentioned as Ganapati in the holy scripture Rigveda. The word Ganapati is mostly interpreted as the guardian of the multitudes. So, it’s clear that Lord Ganesh has been given a very special acknowledgment in Hinduism. And celebrating the arrival is very much binding for the followers of Lord Ganesh. 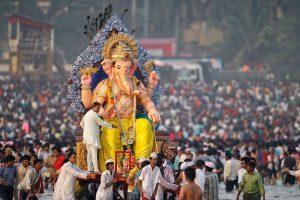 In some subsequent-Vedic texts also acknowledged the arrival of Lord Ganesh. In the holy texts of Grhya Sutras, Lord Ganesh has been mentioned as the god of success. The Skanda Purana, Brahma Vaivarta Purana, and the Narada Purana the acknowledgment of Lord Ganesh’s arrival and his later successes have been briefly discussed in many chapters. According to the religious texts, Lord Ganesh is the guardian of the mountain.

From very ancient times people celebrate the arrival of Lord Ganesh. You can rather say it is the oldest custom of Hinduism. In many regions of the Indian subcontinent, this festival has been practiced for at least of thousand years.

But during the times of the 18th century, Ganesh Chaturthi has been performing in a public forum. More and more people are celebrating the festival.

People offer special prayers on this occasion. Many followers fasts during this festival. It’s ten days longer Holy custom. It’s believed that during the day of Visorjan Lord Ganesh’s returning day. The last day is the festival is known as the day of Virojan. On this day people share their food and meals with their friends and families.

People start Preparation before the month of the Ganesh Chaturthi celebration. Temples are decorated with extraordinary designs. Local makes pandals for various types of cultural programs. Politicians donate huge amounts of money to come closer to mass people through the organization of this festival.

The traditional dance competitions, Political activities, play relating to Lord Ganesh’s story and Intellectual discourse take place at this festival. All the Pandal are hosted by many religious and political communities donation.

In recent times the Visharjan ceremony of Lord Ganesh’s monument on the river water has been questioned by many environmental organizations. It’s very dangerous from the environmental aspect. However, followers continue to perform their religious customs in this challenging time. You may need to know that the schedule has been fixed by the presence of Chaturthi tithi.

For several reasons, the Ganesh Chaturthi carnival has important value to Hinduism. Lord Ganesh is the highest intelligent Goddess. He is the son of Goddess Shiva and Parvati. So, paying huge respect to the arrival of Lord Ganapati is a mandatory duty of the followers. According to religious scripture, he is the supreme God of wisdom. If the followers can satisfy the god of wisdom, then they will get a share of some ritual power of wisdom. Followers will be very grateful.

Lord Ganesha possessed the supreme power of wisdom and spectacular intelligence. Removing all the obstacles to the devotee’s life is possible by observing this holy festival. He is the beginning of new things. So, the Hindu believers must observe this festival with great aspirations and huge anticipation of new beginnings. Only the satisfaction of Lord Ganesha will remove all the obstacles of followers’ life.

Celebration in many regions

It’s a well-practiced custom of Hinduism. For at least of thousand-years Ganesh Chaturthi festival is taking place in many regions of India and outside of India. Many Hindu communities organize this carnival in outside India. In countries like Malaysia, Canada, Australia, Suriname, South Africa, the United States, and Europe celebration of this festival can be seen.

On the other hand, not all the states of India perform this holy festival. Specially In Gujrat, Tamil Nadu, West Bengal, Goa, Maharashtra this carnival is celebrated with huge value and great aspirations.

Nepal is the country outside of India performing this carnival with great importance. As Nepal is a Hindu state, a government holiday is also declared on the day of Visharjan. All the street gets lightened and temples get busier at this time of the year. 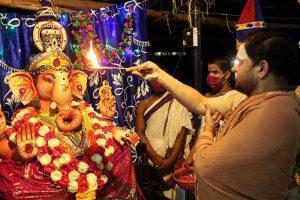 If we can apply all the basic lessons of the Ganesh Chaturthi festival, our life will be much easier. Problems will disappear by the use of intelligence and wisdom.

Negative impacts on the environment

Yes, this festival has some bad impacts on the environment. Mainly the Visharjan ceremony is liable for these problems. Throwing the clay made the monument of Lord Ganesha brings damaging problems to the ecosystem of river water. This question has been raised by all the environmental organizations and communities.

The government has taken some necessary steps to stop this occurrence. Nowadays throwing down the monument in the river water is fully prohibited. But it’s a huge matter of concern that followers don’t follow the rule of the government. They are celebrating this festival in all the formal ways.

So, we must find out a better solution to these unexpected problems. We must protect our environment as well as perform all the orders and duties of the religion.

You can also learn about the following religious festivals:

Diwali – The Festival of Lights